Keb' Mo' is a microcosm of everything that is seductive about the Blues.

Keb' Mo' is a microcosm of everything that is seductive about the Blues. With the contemporary soulful sounds intermingled with storytelling and traditional Robert Johnson-style country & folk, he weaves a musical pattern that is familiar, yet refreshingly new. The performer we know as Keb' Mo' was born Kevin Moore, right here in the Southland, and his boyhood influences range from the gospel music heard ringing through the streets of his Compton neighborhood every Sunday morning, to the modern rock of the day and the Southern heritage of his parents. As wide-ranging as his influences are, there is no question that Los Angeles has been the backdrop for the events that really gave shape to his career.

Quentin Dennard layed the name "Keb' Mo'" on a young Kevin Moore. Dennard would hear Moore start playing blues licks on his guitar, and lean over his skins and holler "KEB MO!" Moore says it was all a matter of style, " It's like if I were playing Jazz I could be Kevin Moore but if I was gonna play the Blues I had to be "Keb' Mo'."

Born in 1952 and raised in Compton California, Keb' Mo' attended a trade college with the intent of studying architecture, but he lost interest in the subject and dropped out. A few years later, he enrolled in a computer repair school, but the idea of fixing computers fora living didn't thrill him much either. During those formative years, Mo' knew he had a love of music, but didn't realize he could make a solid living at it. Coming from such traditional Southern roots, his first instinct was to help contribute to his family any way he could.

His Father was born in Helflin, Louisiana, about 30 miles outside Shreveport and his mother is from Texarkana, Texas. His mother sang at the Beulah Baptist Church in Watts every Sunday morning, and Keb' says church and music were a big part of his family's life. Even while trying to find a vocation, he worked as a part-time arranger at

A&M Records and sat in with a local club's house band now and then. It was not until he was 21, when he was playing mostly Top 40 and R&B, that his destiny came to call.

It is often said that you do not pick what you do or the genre of music you play, it picks you. One afternoon, a band he was playing in was rehearsing at a space in Los Angeles. Papa John Creach, who was the violinist for Jefferson Starship at the time, walked by with his producer. Papa John wandered by the studio doorway, liked what he heard, and hired the band on the spot.

Keb' played guitar on three albums. The first one featured the legendary Big Joe Turner and Harmonica Fats as a guest artists. Keb' says those were the first blues guys he was ever exposed to face-to-face. For the next three years he toured with Papa John Creach, opening for such headliners as the Mahavishnu Orchestra, John McLaughlin's Orchestra, Jefferson Starship and Loggins & Messina. The tour was his introduction to a variety of audiences, and it influenced his playing by allowing him to experiment with different kinds of sounds and styles. It was quite a leap from the nightclub audiences in South Central Los Angeles.

His burgeoning talent as a songwriter brought him back time and time again into the A&M Studios as a contractor and arranged on countless demo sessions for Almo-lrvin Music. Keb' got to work with some of the hottest session players of the I 970's like Richard Tee, Chuck Rainey, James Gadson and Chuck Trammell. During this period Keb’ had a steady stream of work, and solidified his musical identity. He always liked the nickname his buddy had given him, but he never imagined using it professionally. Mo' says "I made a demo tape called 'Kevin Moore AK,Keb' Mo'. Even though I was just kidding around, the A&R guy picked up on Keb' Mo and didn't want to hear about Kevin Moore.'

In 1980 Keb' was signed to the label Chocolate City, which was a subsidiary Casablanca Records. He released an album entitled "Rainmaker", featuring alternative R&B with a little bit of folk and a bit of reggae.As ground-breaking as the sound was unfortunately the album was released at the end of a long slow slide for the label. His first LP hit the streets at the same time the doors closed at Casablanca. Keb' says with a chuckle "It's a collector's item today! We even included a newly-recorded version of "Has Anybody Seen My Girl" off "Rainmaker" on the "Keb' Mo"' CD."

After the release of "Rainmaker" things got really slow for Keb' Mo', and it was not until 1983 when his destiny continued. Under the direction of veteran saxophonist and band leader Monk Higgins, who put together a band called "The Whodunit Band" to play "Marla's Memory Lane" ( one of our local Los Angeles clubs owned by the actress Marl Gibbs). The band played every Monday night and Kevin joined in on guitar. Everybody came down on Monday nights to sit in. Big Joe Turner, Jimmy Witherspoon, Pee Wee Craton, Albert Collins, Billy Preston and many others were frequent guests on the bandstand.

Another turning point in his career was when the "The Whodunit Band" cut an album for one of Al Bell's labels. The album featured one of Keb' Mo's tunes, called "l'm So Lonely." Keb' Mo' doesn't hesitate to give credit where credit is due. He says, "My exposure to Monk Higgins was brobably the most important element in developing my understanding of the blues''.

Keb' Mo’ continued to play local gigs with a group called "The Rose Brothers" and got a job running a friend's demo studio. Keb' would also pick up another nickname. His demo studio friends jokingly called him "Mr. MIDI", because he was able to produce an extraordinary number of songs on that electronic sampler/composer. His days as a local musician and as the nefarious "Mr. MIDI" were numbered. His journey was about to continue with a tum that would call on the experience of the past and all of his talents, with a role that would endear him to the Blues audience.

His phone rang in 1990 with a call from the Los Angeles Theater Center. The call had gone out for an African-American to play Delta blues music in a play called "Rabbit Foot". At that time there was only one guy in Los Angeles that was qualified t9 do this, Keb's friend Chuck Streetman. Fortunately for Keb', Streetman was busy. It was very interesting that just before Keb' got the call, he had started listening to Blues records again. He had started with the roots of Blues like Robert Johnson & Big Bill Broonzy. Keb' remembers, "Big Bill just blew my mind, he was a really good songwriter with an amazing voice and an amazing guitar technique."

After his success in the play "Rabbit Foot", Moore was up for a second dramatic production called "Spunk" at the Mark Taper Theater. Like "Rabbit Foot" the part called for the services of a country bluesman-cum stage actor. This time the tables were turned, and his friend Chick Streetmen got the part while Keb' Mo' became his understudy.

Keb' has gone on to portray one of his idols in "Can't You Hear The Wind Howl?" a docudrama based on the life of Robert Johnson. In it Keb' portrays the country blues legend in a series of dramatized scenes from Johnson's life. The film was narrated by actor Danny Glover. The special blended Keb's sequences with interviews with Johnson's acquaintances and the performers whose work was shaped by Johnson's music.

Like the blend of his music, Keb' Mo' is multifaceted. Although best known for his singing & playing both guitar and banjo, his writing has caught the attention of some of music's most expressive voices. Keb's music has been covered by such artists as Joe Cocker ("Has Anybody Seen My Girl"); B:B. King recorded "Dangerous Mood" for his best selling "Duces Wild"; and Keb's music has been featured in such major motion pictures as Tin Cup ("Crapped Out Again"), One Fine Day ("Glory of Love" Just Like You") and Madeline ("What A Wonderful World''). Keb' had a new song included on the CBS-TV series "Touched By An Angel" Soundtrack called "Follow Me Up."

Keb' Mo' has also made numerous television appearances including ''The Late Show With David Letterman", as a featured actor on "Touched By An Angel" and he has hosted the "Best of the Blues" special anniversary edition of the PBS-TV music series "Austin City Limits".

Keb's touring schedule has been nonstop. Keb's progression since the first time I saw him in I 993 at the 14th Annual Long Beach Blues Festival to the last time I saw him at the New Orleans Jazz and Heritage Festival were truly amazing. Keb' displays true comfort, grace and style as he captivates the audience.

After he finished his set at the New Orleans Jazz and Heritage Festival, he wandered over to the next stage where the gracious and talented Bonnie Raitt was performing. The next thing I knew Keb' was on stage with Bonnie Raitt. The two of them sounded great! Keb' has a love for the music and a respect for his fellow artists. I am glad to report that Keb' still continues to excite audiences all over the world.

Keb's musical journey continues to roll. His last three albums on O'Keh/550 pulling down awards including the Blues Foundations W.C. Handy Award for his 1995 self titled album '"Keb' Mo"' Country/ Acoustic Blues Album of the year. In 1997 and '98 he was honored with the W.C. Handy award for Acoustic Blues Artist of the Year. As if this were not enough his album "Just Like You" (1996) and "Slow Down" (1999) both won Grammy's for Best Contemporary Blues Album.

Keb's talent as a musician, singer and songwriter helped to bring him to the heights he has rightfully earned. His ability and personality charm his audience, his audience's have captivated him and the most beautiful thing is he doses it with respect for the music and the past. 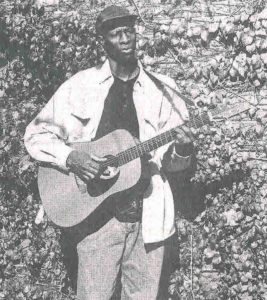 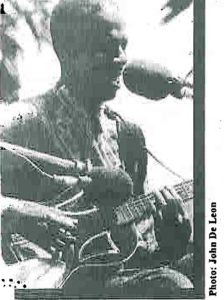