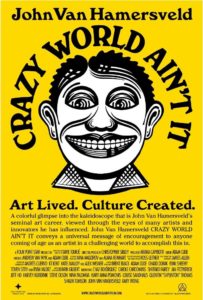 Dave Tourjé is the director and producer of “Crazy World Ain’t It,” which chronicles the seminal and monumentally influential career of John Van Hamersveld - one of the most important pop artists of the last century. Van Hamersveld’s work in Surf, Rock and Muralism is widely celebrated, and his early works include the image for The Endless Summer, album covers including the Rolling Stones “Exile on Main Street” and the Beatles “Magical Mystery Tour,” among many others. Christopher Sibley and Ariana Capriotti also co-directed and produced the short.