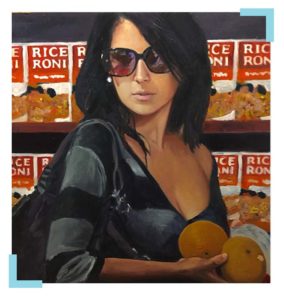 Sheldon Eskin interviews Brendan O'Connell, artist and founder of Everyartist, a non-profit event whose purpose is to "spark creativity" by promoting the act of art-making in among children.

Inspired by Edward Hopper, Brendan wanted to paint everyday America at that moment of massive transition. He first looked through the lens of retail because it’s representative of society, and Walmart because it is the most democratic iteration. While Brendan was in Europe, Walmart had experienced its most rapid expansion. He painted shoppers and interior architecture and explored our fetishistic relation to brands. Brendan was profiled in the New Yorker and on Sunday Morning CBS, a guest on the Colbert Show, and featured in Time magazine. He went from being the guy who was kicked out of dozens of Walmarts for taking pictures to being the guy who can set up an easel in any store in the world.

While he continues painting brands, he has begun another series about America in transition–this time focusing on everyday people in their homes. He is traveling the country, staying at Airbnbs and painting the hosts of the rooms he rents. Accompanying each painting will be a narrative, similar to the blog Humans of New York, about the people’s lives.

His work is in the permanent collection of the GA Museum and the High Museum of Art in Atlanta. He has executed commissions for both Walmart and HEB as well as a number of privately owned companies.

Brendan is also the artist/founder of Everyartist, a non-profit event whose purpose is to "spark creativity" by promoting the act of art-making in among children. Everyartist and its supporters are responsible for coordinating the largest community art event in history, Everyartist Live!, which takes place annually at the end of October.

Presently, Brendan works out of a barn in rural Connecticut where he lives with his wife, landscape painter Emily Buchanan, and their two children.